How did you get into music?
‍
I got into music in a very sudden, kind of frustrated way. Since I was a kid, I’d always sung and written songs or short stories or poems I turned into songs. I was also in the school choir, but I started taking it seriously and was like, “I want this to be my job” when I was around 15. I was doing GCSEs, which are exams in England, and I was just frustrated, as most GCSE students are.
‍
So, I went on joinmyband.com and managed to find some legit people — three other girls who were a couple of years older than me — and we started a band. We rehearsed every week, did loads of shows, filmed loads of videos, like, I was super set on it very quickly.
‍
Then after about a year, being a control freak kind of got to the others, and they were like, “Yeah, you’re on your own.” I was devastated. But then I remember playing my older cousin some songs, and he was like, “You can do this on your own. You don’t need a band,” and I was like, “ Oh. Right, yeah.” So, I started playing shows and making songs all on my own, and that’s kind of how GIRLI was born.
‍
‍
You've mentioned that your ‘Hot Mess’ EP prompted a change in your music and style. Talk to me more about that transition.
‍
My Hot Mess EP was a turning point for my music because previous to that, my music was sugary and sweet, almost like hyper-pop. Then with Hot Mess, I took things to a new territory — the slightly more punk, aggressive, alternative side of pop, which I have since identified with more as an artist.
‍
There’s a mixture of sounds on that EP, which is why I still love it. You’ve got the bass, the guitar, the "band-y" punk vibes in "Hot Mess." But you’ve also got "Can I Say Baby," which is like sassy synth-pop, and "Not That Girl," which is totally different but kind of in that same vein.
‍
Then there’s “Neck on Tour,” which is very lyrical and completely different, production-wise. I think that song made me realize, "Okay, I’m still figuring out what I want to sound like, but this is who I identify with more." I gained a lot of new fans during that era because of that song. The message I was putting out there kind of segmented me as this outwardly spoken feminist artist, with more of a punk element.
‍
‍
How did you come to realize that you were pansexual?
‍
It was a bit of a gradual process, to be honest. I think sexuality, for me anyway, is quite fluid. I realized I like girls when I was like 14 because my best friend in school was so open about liking girls, and she would talk about fancying girls all the time. She watched loads of girl YouTubers and would be like, "Oh, I fancy this one loads," or point out female singers of bands and be like, "That’s so hot." And so, I started thinking about it and realizing, "Huh, yeah. I kind of agree, actually.”
‍
I started having girl crushes when I was 14 and came out as bi when I was 15. I got into certain LGBTQ bands and music and started going to gigs where there was a stronger gay community because the school I went to was quite homophobic and close-minded. The only time anyone would talk about being gay was, like, if the guys would joke around saying, "Oh, you two should kiss," like, "Mmm, lesbians." It was not a comfortable environment, and there were a lot of closeted people in my school for sure.
So, I did a lot of exploring when I would go to shows. I’d meet friends and realize, "Oh, she likes girls too, that’s funny. Maybe that’s more normal than I thought."
‍
The pansexuality came when I turned 18 and started going to more parties and raves and had a new set of friends who were very open. I started realizing like, "Okay, well, I’m saying I’m attracted to boys and girls, but I’ve hooked up with non-binary people, and I fancy non-binary people. They don’t fit into either of those categories, so to respect them and their identity, I guess I’m pansexual."
‍
But my sexuality is fluid and continually changing. I have months where I’m really into guys, months where I’m really into girls, and months where I’m into everyone. 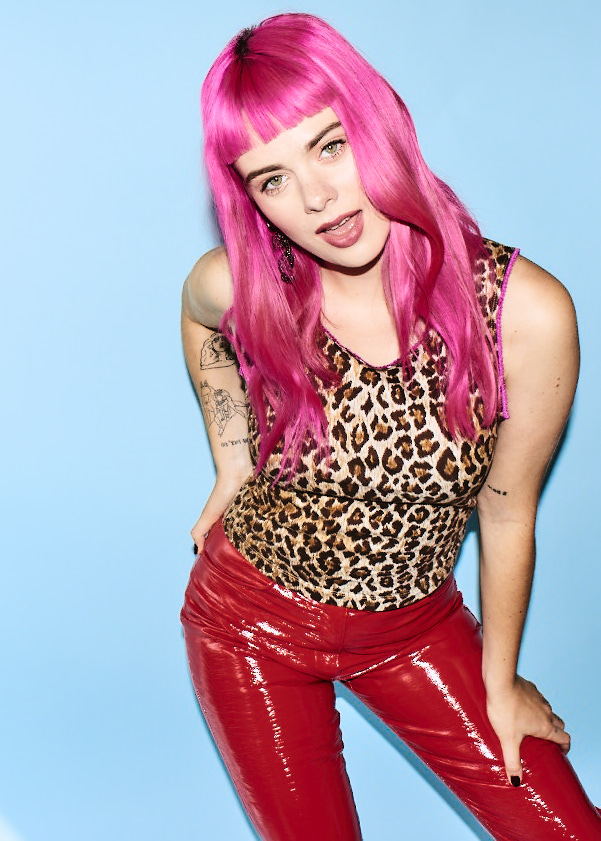 How have you kept your hair pink for so long without damaging it?
‍
That is a good question and one I am really not sure about. My hair was very damaged about two years ago, so I started having it done professionally. I redo the pink myself, but I always have it bleached in the salon. They use better products for your hair, and honestly, it makes a world of difference. I am surprised my hair hasn’t fallen out by this point.
‍
People are always asking me, "Oh, do you think you’ll have pink hair for long," and it’s like, "Well, do you think you’ll be the same person that you are now in two years?" I have absolutely no idea. I like my pink hair, and I don’t see it changing anytime soon, but who the fuck knows?
‍
‍
What made you feel ready to put out your debut album last year, and what inspired it?
‍
I didn’t feel ready to put out an album, but I had so many songs, and I just wanted to put something out and go on tour and be able to say, "I put an album out."
‍
In retrospect, it was also pressure from the record label I was with at the time saying, "Put an album out." But I'm happy, and I don’t regret putting it out.
‍
I think all of the songs really link together and represent a chapter of my life. That album was just inspired by everything. I see each song as a diary entry of different things going on in my life — falling in love, friendship breakups, mental health struggles, discovering sexuality more. And they're all very different, so I don’t think you could say it was inspired by one kind of music because it’s so all over the place, in a good way. Each song could be from a completely different artist, to be honest.
‍
‍
Which song on the album is most special to you?
‍
The song that’s most special to me is "Friday Night Big Screen" because that song was just really surprising. It just kind of came out of me, and I was like, "I’ve never written a song like this before." I mean, the first song I ever released literally starts with me saying, "You thought I was gonna sing a ballad, like, fuck no."
‍
It’s special to me because it’s about falling in love for the first time, which was a real monumental event for me as a person and as an artist that happened the year before my album came out.
‍
It’s also really sad listening to it now because that person and I broke up, so every time I sing it or someone mentions it, it’s kind of bittersweet, like, "Do I love this song? Do I hate this song because the love’s not there anymore?" But, you know, it was about falling in love, which happened regardless of whether we’re still in love or not.
‍
It’s that fresh, exciting feeling of like, "Finally, I get to be like the movies," which is all I ever dreamt of doing when I was in school hating my life. I always wanted to be in my own movie, and falling in love was the first time I felt like, "Wow, this is real. I’m really like those girls I saw on the big screen." 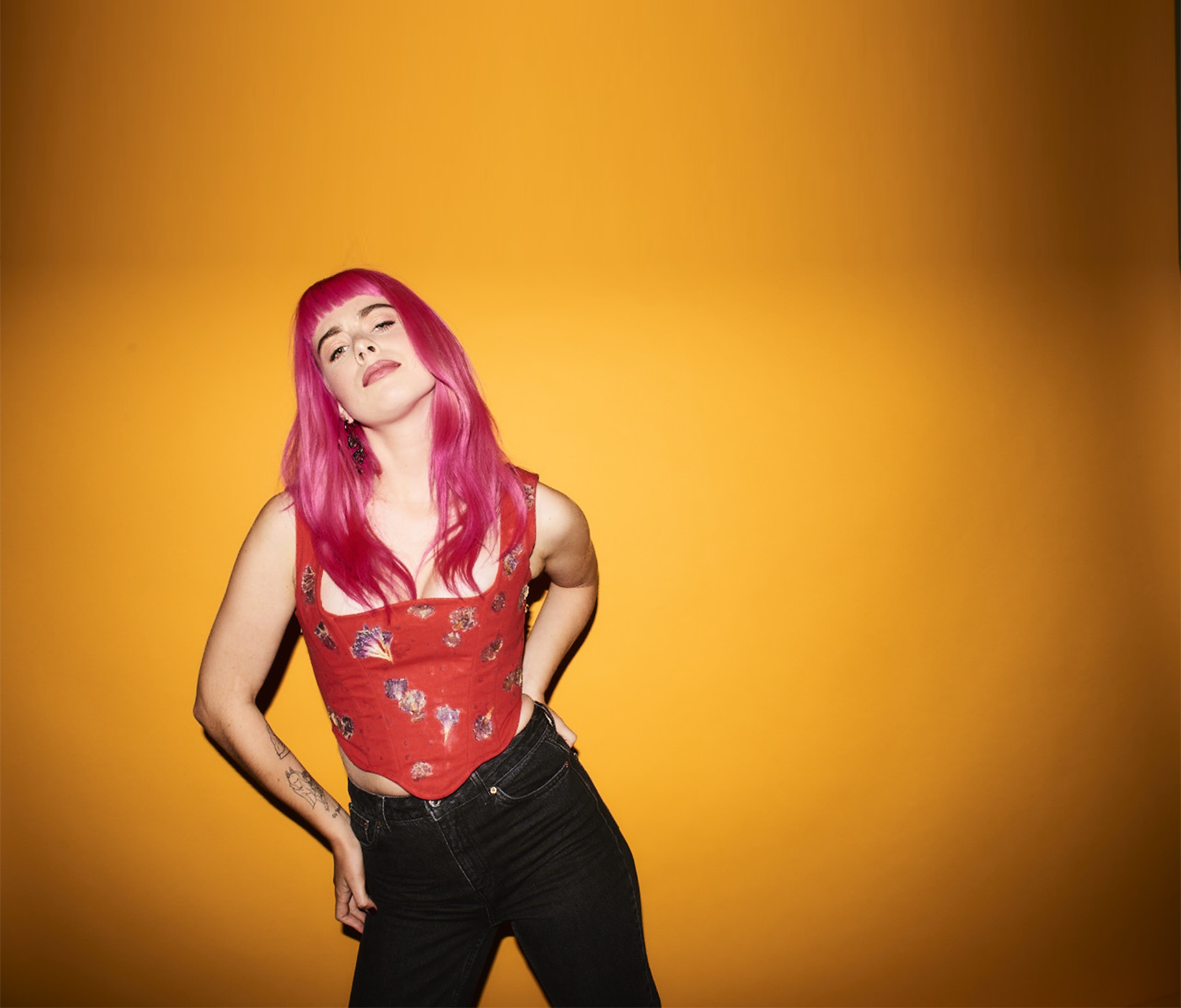 Can we expect new music anytime soon?
‍
It has been a tricky time for me. I got dropped from my record label, left my management, and kind of reshaped my whole team. I had almost like a big hibernation as an artist, and I have been writing so much new music, which I’m really excited about. I think it’s a next step up for me, and I think I needed the time to make that happen and make the music better. So, absolutely, there’s music coming so soon…soo soon. In 2020, there’s gonna be a lot of new GIRLI music.
‍
‍
What are some goals you’ve set for yourself as an artist for 2020?
‍
In 2020, I wanna play a lot more international shows, and there will be some announcements very soon, showing that I’m already doing that. I wanna play in America, Europe, and hopefully Brazil or Asia; that’s a massive goal of mine.
‍
I wanna put out new music accompanied by visuals that I have full creative control over. I love some of my old music videos, but they were kind of overshadowed by the presence of a major record label dictating what I should be doing. Even though they were my ideas, I definitely feel like now I can manifest more authentic ideas in a much freer way.
‍
‍
What is one of your proudest moments?
‍
Probably every time I play a sold-out show. The feeling of being in a room filled with people who love your music and wanna vibe to your music is always pretty special.
‍
‍
What’s the number one thing on your bucket list?
‍
The number one thing on my bucket list is touring the world, to be honest. I would love to play shows just everywhere. I wanna do loads of US tours, and I wanna play in Asia, Brazil, and the rest of South America.
‍
I love traveling, and it's kind of equal to my passion for music, so that’s a big reason why I love having this job.
‍
‍
If you could have the answer to any question at all, what would you want to know?
‍
I'd want to know what happens after we die.