WizTheMc was born in Cape Town, South Africa, but grew up in the town of Lüneburg, Germany, where he moved to with his mother and older brother at the age of three.
‍
When he was around 12 or 13 years old, he grew an interest in rap music, listening to artists like 2 Chainz and Tyga. Two years later, in 2014, he was hanging with a friend, when they started talking about where rap comes from and how rappers first get started.
‍
“You gotta start at some point, right,” he asked himself.

That’s when Wiz decided to give music a shot, so he and his friends started recording music under the collective NOHOMES. By the next summer, he was spending his time freestyling and smoking weed with his homies.
‍
“It was so fun — the collectiveness of my friends doing it,” Wiz recalls. “That’s, in my opinion, where the best work comes out because of the chemistry that’s in the room. It’s just a bunch of friends hanging out doing something.”
‍
After that summer, all his friends stopped making music, but Wiz fell in love with the whole process and continued on his own, writing his first song in 2015.
‍
“I just kept writing and fell in love with the whole process of finding beats, finding music, figuring out vibes, and all of that.” 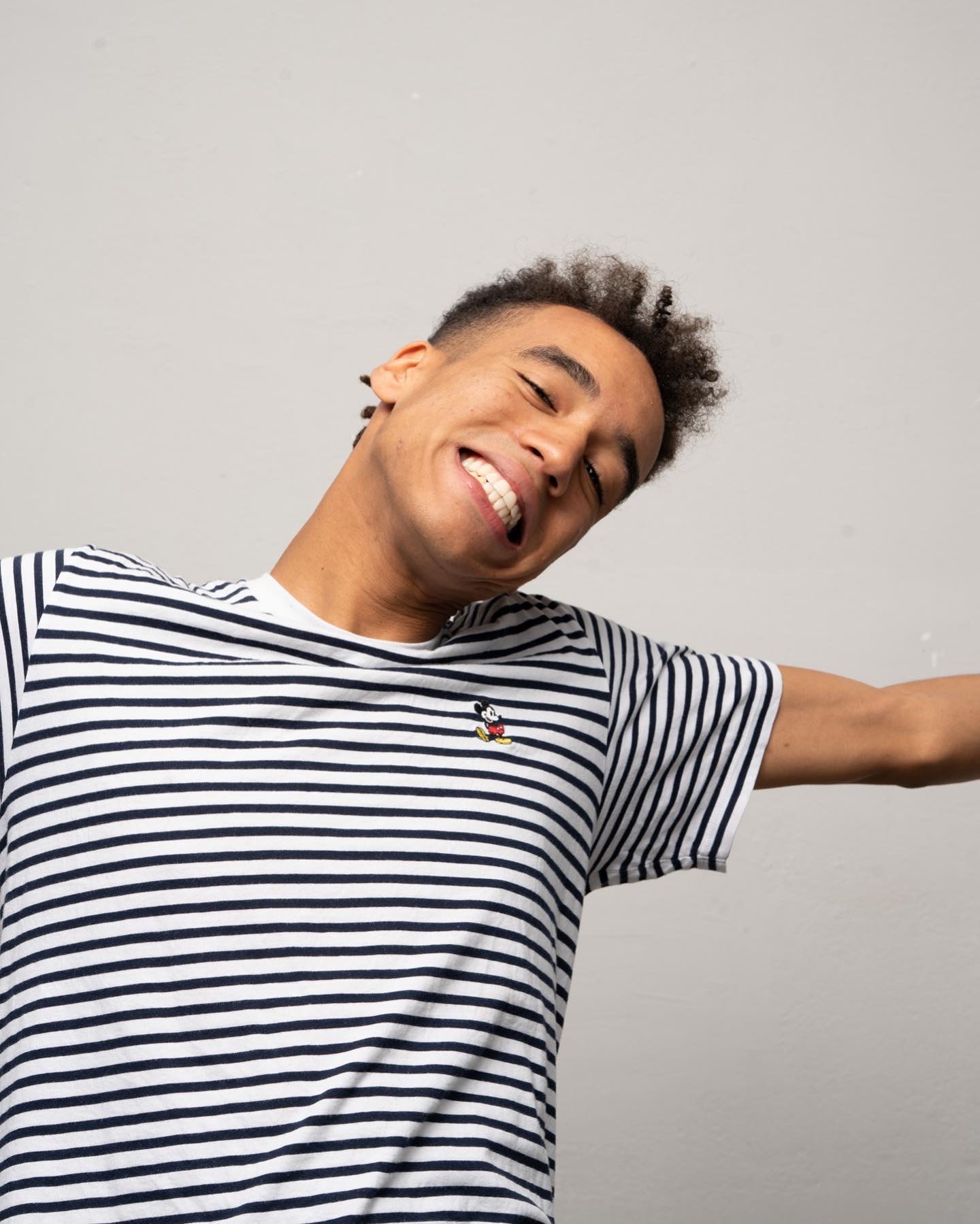 J. Cole and Kendrick Lamar are two rappers that have kept Wiz motivated to continue writing and making music.
‍
“They display their feelings so sophisticatedly and make their music so relatable. They even express unpopular opinions of vulnerability in an acceptable way for society. That really inspired me and made me realize like, “That’s safe. It’s acceptable to write down your feelings.” Ever since then, I’ve just wanted to be able to write down my feelings as accurately as possible, and that’s what I’m pursuing still.”

In 2016, Wiz decided to head overseas to Toronto, where he spent two years meeting local artists, exploring the city and finding himself as an artist. In 2019, he moved back to Germany and is currently living in Berlin.
‍
In the beginning, Wiz was finding and using free beats from YouTube in his songs. After learning how to produce two years ago, he began producing for himself. Up until May of this year, when he started working with other producers, most of his released music was produced by himself.

Over the past two years, Wiz has been a music-making machine. In 2019 alone, he put out 15 singles and three EPs, and if you think he’s drained, he’s only getting started.
‍
“I’m not releasing an album yet because an album, for me, involves a whole concept, or a huge meaning behind it. But, my first studio-quality mixtape will be coming out on January 4th. It’s going to include ten all-new tracks that I made with my producer Hugo, who I met this summer in Berlin.” 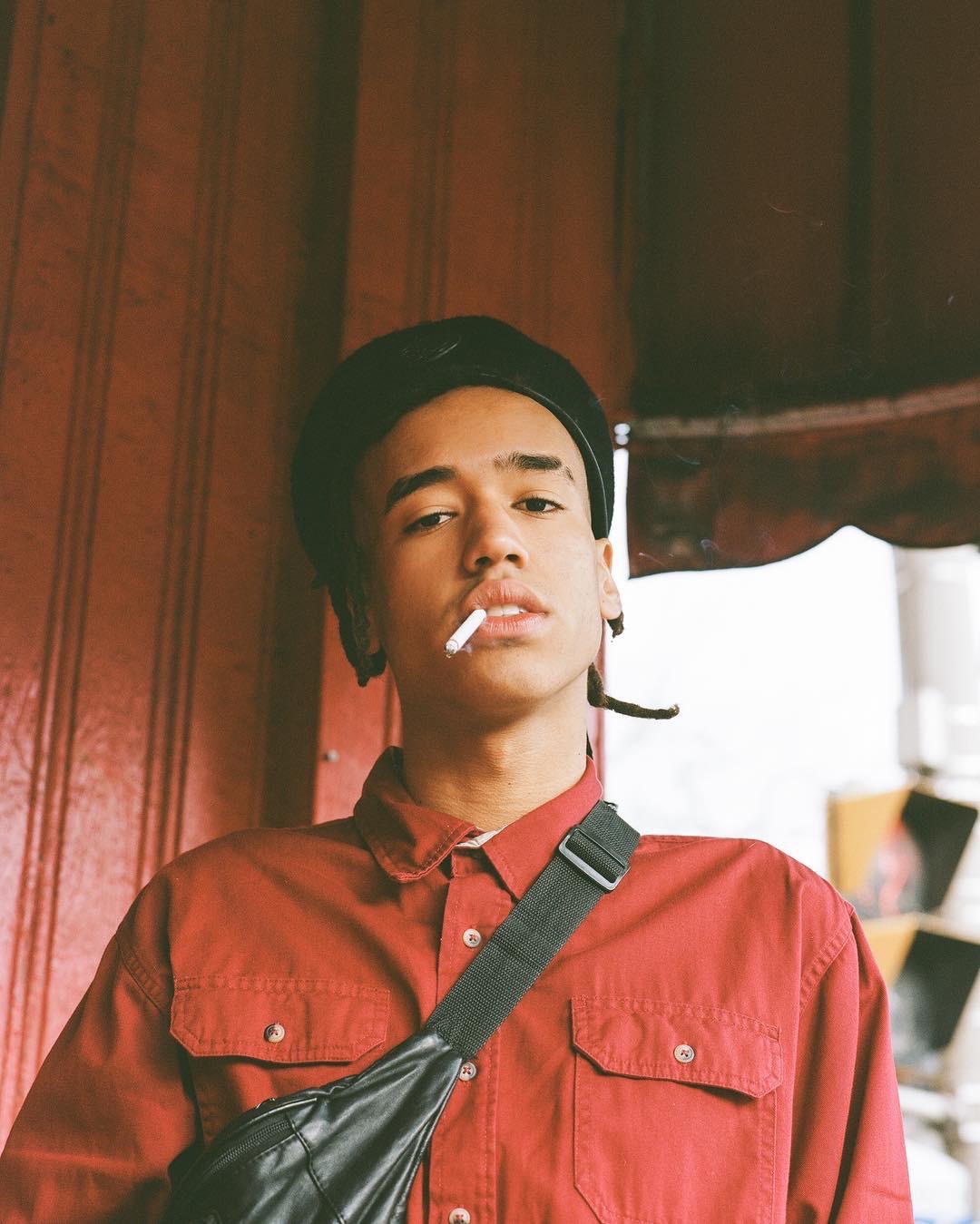 Despite continually releasing music, this is the first time in a while Wiz has found so much time on his hands.
‍
“I don’t have to work a job. Just making music is not enough for the soul and the spirit. You have to do different things, get hobbies. I had to learn that over the past few weeks.”
‍
With that, he recently decided to take up hip-hop dancing, which he does once a week. Aside from dancing, Wiz enjoys reading, taking walks, and just being by himself. While his girlfriend attends school and paints at a studio, he spends a lot of time alone at home, where he finds ways to keep himself busy.
‍
“I feel like I’m a stay-at-home boyfriend that takes care of the place and keeps it clean. For me, cleaning the house is very calming. When everything is clean, I can think and start working way easier than when everything is messy.”
‍
While still in the developing stages of his career, Wiz’s primary focus is directed towards figuring out his sound.
‍
“I feel like I’m not there quite yet, and I don’t want to be there quite yet. I like experimenting and trying different things.”
‍
Who knows what to expect from his upcoming mixtape?
‍

Check out our Q&A with WizTheMc below. 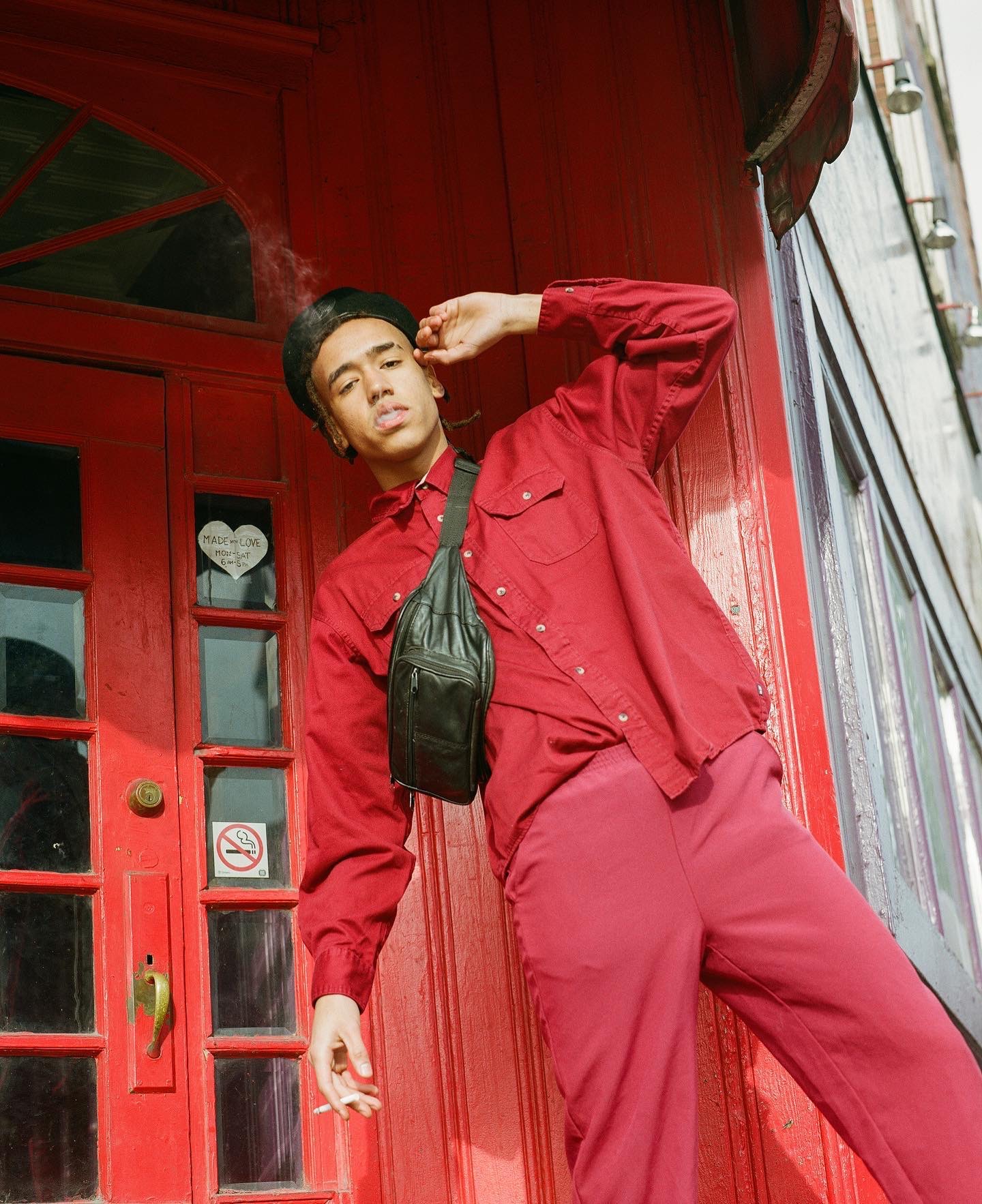 If you could describe yourself in three words, what would they be?
I guess loving, curious, and weird.
‍
What’s your favorite song at the moment?
A quick answer is one of the songs off my new project, but let’s pick a song from someone else. I really dig Milky Chance’s "Fado."
‍
What’s your favorite color?
Yellow.
‍
What’s your favorite season?
Spring.
‍
What’s your favorite cuisine?
Pizza, pasta, burritos, burgers.
‍
What’s the strangest food you’ve ever eaten?
I don’t know; I think lobster is pretty weird. I’m not really into seafood, but I recently started liking shrimp. I guess the weirdest food I’ve seen was frogs in a salad when I was in Vietnam. It was super cheap.
‍
What’s your favorite TV or movie genre?
What genre would you say Black Mirror is? I’m into that: psychology, the future, thought-provoking stuff. Most of the things portrayed are actually real and are happening, but they disguise it as sci-fi so we can enjoy it and not be scared. I like when the truth is in plain sight, but it’s disguised in an art form.
‍
What’s your least favorite type of music?
I guess, trance. The psychedelic, super-fast stuff that people listen to when they trip. I don’t know what they take; they pop pills and do all these drugs and shit. Extreme spiritualists are what they would call themselves.
‍
What would you consider your biggest strength and weakness?
I would say my strength is being an entertainer/extrovert at times. My biggest weakness is that I’m not good at keeping casual friendships. I really don’t have many people I see on the regular or talk to a lot. I have like six people I care about and talk to. So, I guess, keeping friendships alive, or seeing the true value in that. 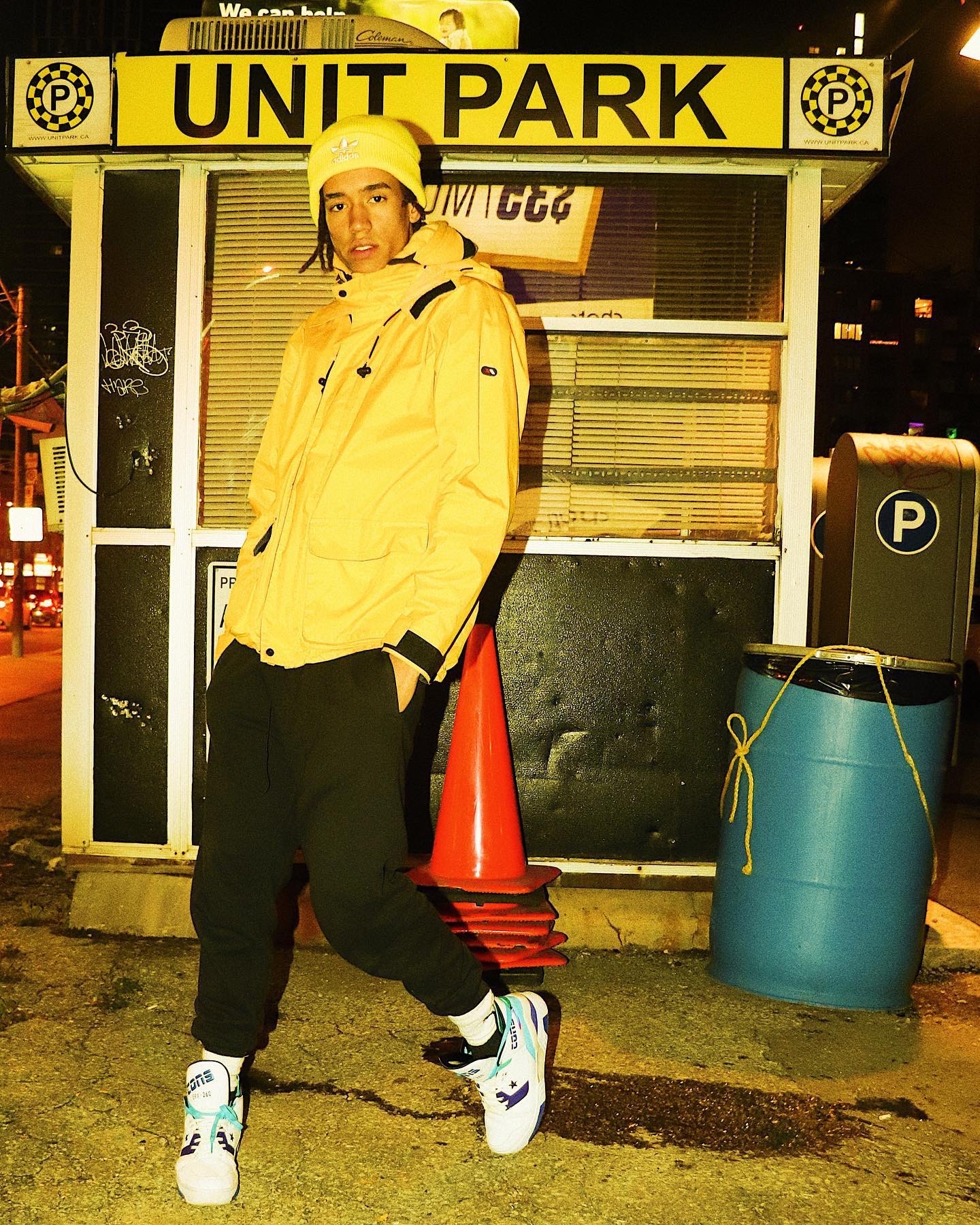 What’s your greatest fear?
My greatest fear is that what I’m wishing for, or working towards, won’t be as fun as I imagine it to be. I’m pretty optimistic, and I would consider myself an autonomous person. I’m aware of my decisions, but there are still so many things I’m not yet aware of. Right now, I’m a hungry artist. I want attention; I want people to see me. A lot of artists, when they look back in hindsight, say this is the most fun part of being an artist. Well, maybe not the most fun, but there’s something so pure about it. There’s no money in your face; there are no distractions; it’s just you wanting to get heard. I want to look back and see myself having pure fun because that can go pretty quickly. Everything is slow until it goes fast. Like, do I really want my schedule to be full? But at the same time, I want to get paid, I want to get my manager paid, I want to get my producers paid. It’s all fun, but I’m still aware of the negatives.
‍
What’s your biggest pet peeve?
When people talk about stuff that won't benefit them in the long run. I talk about bullshit, but I mean like talking about other people. Useless, unproductive negativity. There’s a place for negativity — to reflect and have criticism — but that kind of negativity is not helpful whatsoever.
‍
Are you a morning or night person?
Morning. I crash super early. Before I met my girlfriend, I would go to sleep between nine and 11. Now I go to sleep between 11 and one because of her. She’s a night person. She has a bunch of energy at night. I still try to wake up around eight every morning, though.
‍
What’s the number one thing on your bucket list?
To not be distracted. I don’t know; I try to live my life very internally. It's more so something I'll need to keep working at throughout life, rather than a thing I can check off. But other than that, definitely meeting J. Cole. I’ve gotta meet him.
‍
If you could have the answer to any question in the entire universe, what would you want to know?
Where does the love of your life come from?